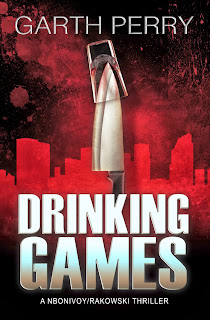 Connected with Joe Konrath on a project who suggested that his cover artist, Carl Graves, redesign my cover for Drinking Games. I totally accepted this idea and am excited to showcase the new design for my latest thriller. And in case you're interested, it's available from Amazon. :)

PI Ned Nbonivoy is up against a sinister psychopath who bestows random acts of havoc as part of a deadly game, leaving too many rabbit trails to follow. Ned needs someone who can help him focus. AJ Rakowski, a psychic detective, is just the kind of mentalist who can help. Rakowski has been using her paranormal abilities to close cases, though with each success comes unwanted attention. Ava Jane knows it goes with the territory. But when she captures the attention of a serial killer known only as Carlton, that's when the real game begins.

Psychic Detective AJ Rakowski also appears in the short stories, Abductions and Beatings (available soon), which were written in collaboration with Joe Konrath and feature his iconic female homicide detective, Lieutenant Jack Daniels. Drinking Games is approximately 13,000 words, or about 45 pages in paper. It is a short novella, not a novel. Although a stand alone story, it is part 1 of a 3 story arc.

Thanks for Stopping By

Hello, I'm Garth Perry and I write contemporary fiction - from mystery, thriller, and suspense to urban lit and modern realism.
My current series of thrillers are somewhat interconnected. In Drinking Games, psychic detective AJ Rakowski from Chicago finds herself at the center of a serial killer's deadly games. The case leads her to Detroit where she meets Ned Nbonivoy, a PI who hates guns, violence, and the mob. Too bad, he's mixed up with all three, especially in the upcoming novel, Simply Criminal.

Thanks for your interest. I'd like to hear from you. Please email me at garthperrywriter at gmail dot com.

Worm: A Coming of Age Novella
Paperback from CreateSpace